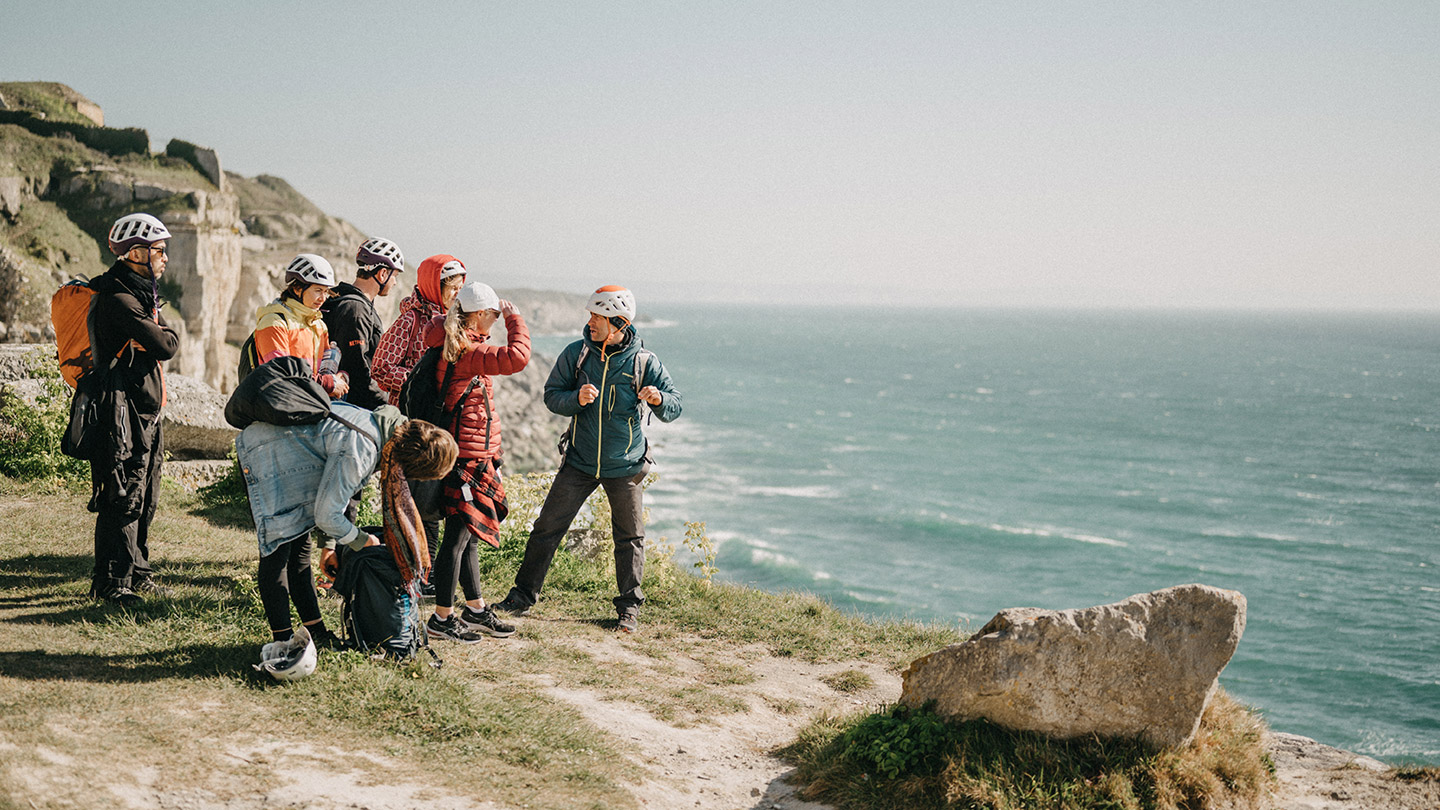 If you’re an experienced indoor climber you might be keen to test your newfound abilities on some real rock on the BMC Ready to Rock course. 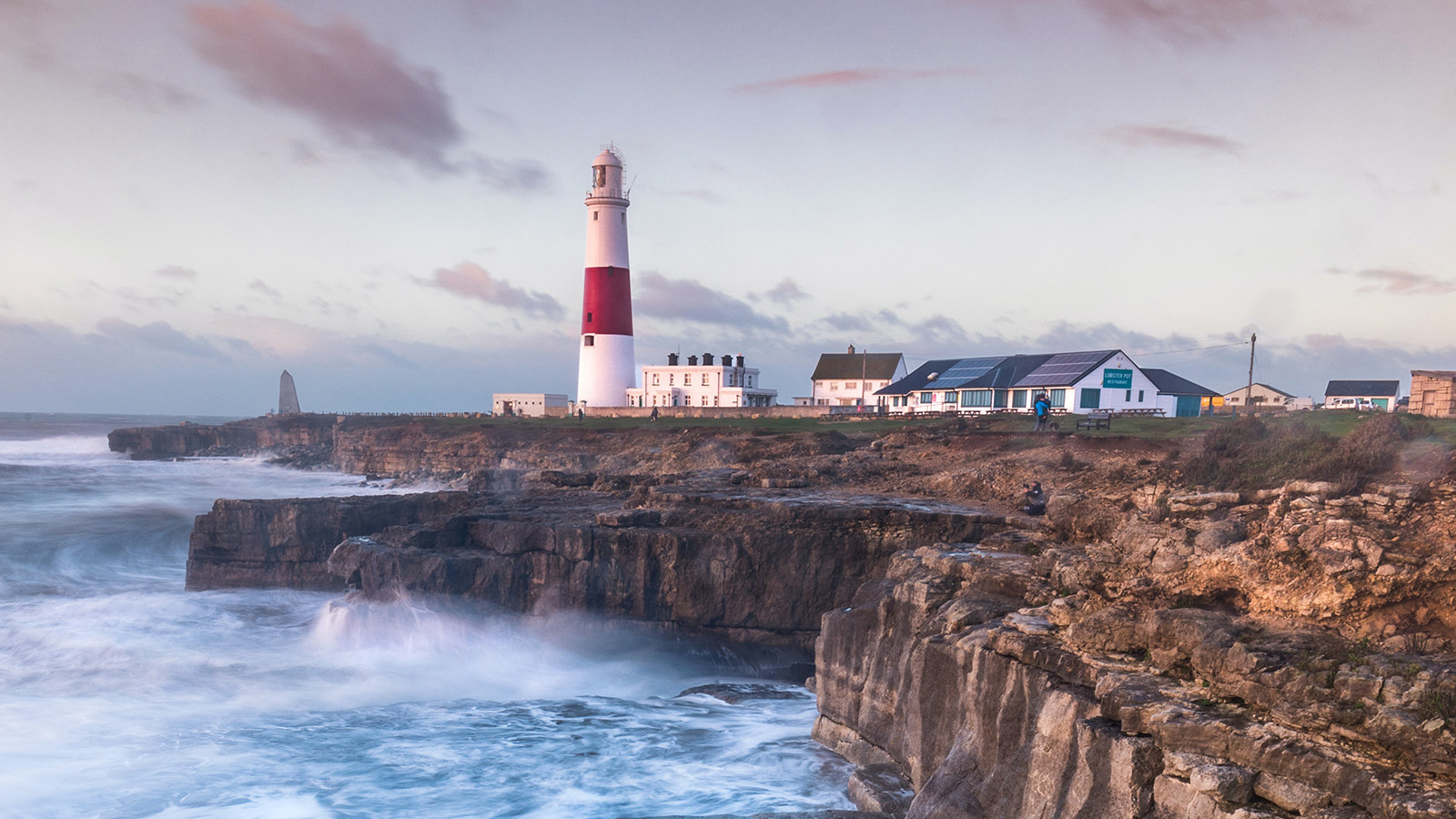 The Isle of Portland is effectively a huge limestone boulder off the coast of Dorset and is one of the UK’s premier climbing destinations for climbers of all abilities. Trad and sport climbers will find plenty to test them, whether they’re climbing solo or as part of an organised activity course. Portland is also a great place for families, kids and beginners to don a helmet and harness to begin scaling the heights.

Portland’s location, out into the English Channel, means there are lots of south, south-west and west-facing crags and cliff faces that catch the sun, making it a great year-round climbing destination. The limestone rocks at these sunny spots dry out quickly, creating more accessible options.

There are also areas on the island that offer protection from sea winds and the weather is often very different from the mainland. Equally, conditions can be as dramatic as the landscape itself on Portland’s southerly tips, making for an epic adventure.

The most famous climbing spots in Portland

At the last count, there were some 18 identified climbing areas on Portland. Each offers a multitude of routes, depending on the experience you’re seeking, your ability level and the grade of the climb you’re prepared to take on. Many people consider the west side of Portland to offer the best climbing on the island, as the sun hits here long into the afternoon. However, the eastern coast makes for a great morning ascent and some of the easier routes can be found here.

Beginners tend to head for the Fallen Slab, Cuttings or Cheyne Weares areas. Intermediates might progress to The Battleship, Blacknor and the Lighthouse areas. Climbing experts will find plenty to challenge themselves at Coastguard Cliffs and Wallsend, but each separate place offers climbs to suit all three levels. As Portland takes its fair share of batterings from winter storms, the crags and faces change annually and with the seasons, making each visit a unique one.

There are lots of dramatic trails around Portland, offering the opportunity for a ramble and a hike combined with bouldering and scrambling. The South West Coast Path meanders its way around the island, offering a 10-mile section with waymarked paths. You’ll find sections of the route that do require a bit of a scramble.

Portland was also extensively quarried from the 14th century right up until modern times, so there are trails as well as climbs to be found in the abandoned quarry locations. The boulder areas strewn across Portland and around its shoreline also offer abundant opportunities for bouldering.

Where to stay during a Portland climbing trip

There are no full time campsites in Portland, but there is a summer only campsite that is first come first served close to the Portland Bill.  There are also plenty of B&B options. Those with a tent can stay over in Weymouth, where there are plenty of sites. If you’re fortunate enough to have a camper van, you’ll find that all the best climbing places in Portland are really close to the island’s car parks, meaning you can rock up, change and hit the heights within minutes. Or, for something truly unique, exhilarating and surprisingly restful, why not spend the night on a portaledge with a cliff camping option?

All that remains is to choose your experience. If you’re looking for Dorset climbing courses, climbing in Portland sessions, trad climbing or learning to lead courses, contact us to find out more. 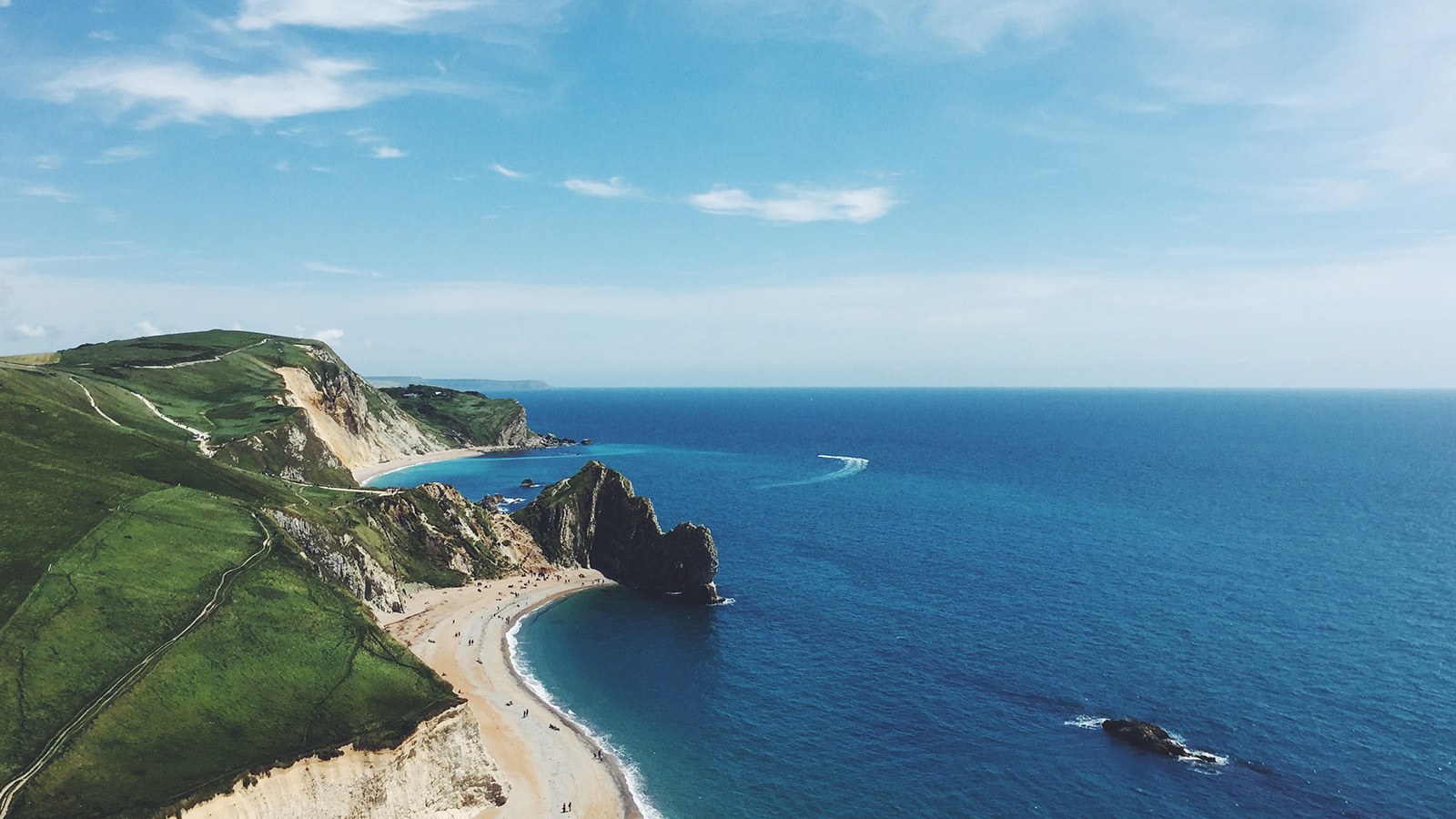 This is wild camping at its wildest. It’s a campsite in the sky. Whether sleeping can really be classed as an extreme sport may be questionable, but cliff camping is certainly extreme, especially cliff camping for the first time. Combining abseiling with a night spent suspended over the edge of a precipice, there’s no need for advanced climbing skills, just a head for heights. An evening meal can also be included (lowered on ropes) for the most unique B&B adventure there is.

Cliff camping is a magical experience. You will most likely sleep too. The calming swell of the sea tends to have that effect. The lapping of the waves is only broken by the call of seabirds at dusk and dawn. In fact, your vantage point for the night is precisely as that of the gulls and cormorants that throng the headlands and escarpments of the coast. A curious one or two might even pay you a visit.

What is a portaledge?

Portaledges are collapsible platforms developed from army cots that are designed for sleeping on vertical surfaces – most often cliff faces. When Tommy Caldwell and Kevin Jorgeson made the first free ascent of the Dawn Wall in Yosemite (the ‘hardest multi pitch climb in the world’), the pair rested during the expedition in a portaledge. The pair free-climbed the Dawn Wall on Yosemite National Park’s enormous El Capitan for the first time in 2015. It took them 19 days to do so and, naturally, they had to get some shut-eye during the ascent.

A portaledge is suspended from the cliff face and typically measures 2 metres x 1 metre. They’re light, and they’re portable, sturdy and safe. Portaledge camping is a bit like sleeping in a hammock but rigid and fitted into an aluminium frame. You can even stand up on them as well as sit and of course sleep. The sleeper/climber wears a harness connected to the main anchor point by rope so you don’t need to worry about rolling out in the night.

Aside from a sense of adventure and a head for heights you don’t need to equip yourself with a great deal to spend the night cliff camping. Your guide will supply you with the essentials – that is, the portaledge, harnesses and other equipment.

You’ll need to bring with you:

As for the question that everyone asks – how do you go to the loo? Your options are a specially or to return to the top or with a short walk head back to the toilets at the car park.

Cliff camping for the first time on the stunning Portland climbing faces is a truly awe-inspiring and unique experience. You could literally be sleeping right next to the dinosaur bones that are found on this stretch of coast. It will be a night you’ll never forget. Find out more about cliff camping at Young’s Adventure Solutions and get ready for your next adventure. 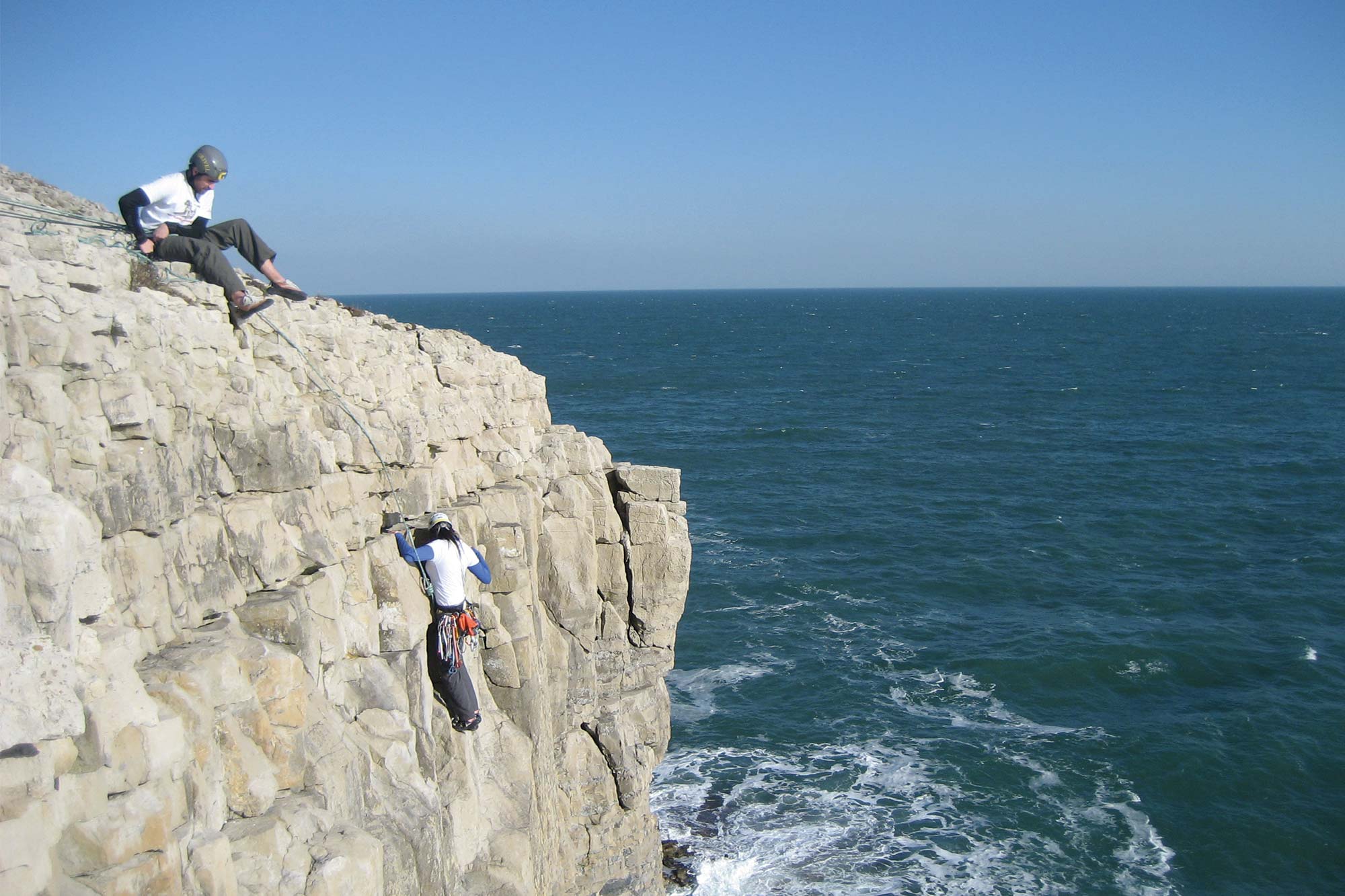